"We light this chalice to remind ourselves..to take good care of the earth, because it is our home."
UU Chalice Lighting Response
As I look out upon the blanket of snow that is covering these parts of Seattle and the Puget Sound region, it's hard not to think about earth and climate and ecotheology, especially in the penultimate couple of days leading up to Earth Day 2008.

I love how the words above find themselves sandwiched in the space between loving kindness for our fellow brethren on this planet, and living lives of goodness and love. Earth is the sacred ground upon which this covenant finds communitas, just as the wind becomes a Holy Spirit that whispers the Truth and Beauty of these words.

I think there was a huge part of me that resisted the notion of Church for years because no religious institutional construct could ever come close to my ideal of what Church should look like.

The closest I've come to discovering such a sacred place was in the environs of a couple of outdoor chapels in the Kananaskis foothills of the Canadian Rockies. And while I still consider nature to be the greatest of all the houses of worship on this planet ~ from the beaches, the mountains, the meadows, the forest, the rivers, the canyons, the deserts, and the tundra, to the Great Lake and ocean waters; I have since reconciled my notions of holiness relative to place.

I now see nature in more panentheistic terms - that is to say that I recognize that the no-longer sentient and seemingly profane wood in the pews can be a glorious creation of the divine tree from which it came, and that the tranquil, wooded view from our sanctuary is a blessed sight to behold. 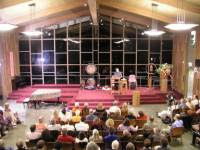 Today in church, we sang This Land is Your Land. Long time no sing that classic folk song. We sang a more globally-correct version that mapped a vision "from Patagonia to the Azores Islands," rather than the Americanized one that saw only "from California to New York Island," or even the Canuck version I found myself automatically singing today as befit my own tribal upbringing, which had me imagining the limits of the land "from Bonavista to Vancouver Island."

And it got me wondering: Why are people so scared of having a global vision? What is it about one-world sensibilities that scares so many? And for that matter, why must we be so tribal and totemic and contentious and greedy and wasteful and toxic and so fearful of humane response? We kill our earth softly every day and in doing so, we annihilate pieces of our collective soul like so many piercing pinholes in the fabric of existence.

I don't pray much but when I do, it's inevitably for a quantum shift in Worldview. Not to dissipate plurality but rather to really and truly integrate it in both thought and deed ~ this whole, great big, messy co-existent, web of life. Think about all those sexy in words for a minute...Innovate, Integrate, Involve, Intrigue, Ineffable, Indigo, Infinite, Integral.

We're all in this together. It is your land, my land, and ultimately, no one's land because no single one of us can hold claim and title except through our good deeds. To take good care of the earth, because it is our home. 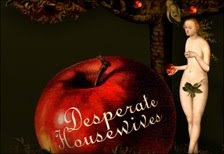 One of my seven deadly TV sins is Desperate Housewives. As I always say, takes one to know one.

A new episode aired this past Sunday and the theme was religion. It was only a matter of time before God came to Wisteria Lane (shoddy ratings owing to viewer attrition, stale satire, a few months long writer's strike, and show hiatus notwithstanding).

God entered stage north when the tornado struck - in all its mysteria, hysteria and Wisteria wonder. That was where we left off a few months ago.

God was asked to stick around awhile or so it might seem. Sunday's episode opens with Lynette deciding - post-cancer and tornado scares - that she wants to start going to church. So she approachs Bree, the lesser of all irreligious evils called friends, and Bree offers to take Lynette, her reluctant couch-slothing, football-loving hubby, and their four amiable children to her Presbyterian Church. All all was well and swell until Lynette dared raise her hand during the sermon to ask the Pastor some pointed questions concerning that oh-so awkward topic of good, God and evil in the Garden of Eden.

Bree was mortified and later suggested that Lynette might be better off with the Unitarians because she heard that with them, "anything goes."

Someone at the Unitarian Universalist Association must have been loving the timing of that desperate if disparaging dialogue, coinciding as it did with the latest UUA ad campaign, which includes full-page ad spreads in Time magazine and the like. Perhaps that line was even bought and paid for in pop culture fashion. If it was, kudos to the UUA for doing some saavy church planting in TVland. Who rightly knows.

Who knows indeed. In fact, who knows might well be the two words I would have chosen, rather than "anything goes," to describe us them thar Unitarians. At the very least, it would have been "seek freely."

On the topic of UUism though, I've found myself not quite evangelizing or spreading the good news of UUs these past couple of weeks, so much as setting the record straight. One young Mom I know wants to find a new church home for her pre-teen daughter ~ one far removed from the church of her childhood. She may indeed find what she's looking for in our humble abode. She's planning to attend an upcoming Coming of Age ceremony to hear how our daring young 13-year olds articulate their own personal theologies. In two words? Damn inspiring.

A few other members that I've not so coincidentally met through my other community spheres lately have validated how important the fourth principle of UUism is to them ("a free and responsible search for truth and meaning") with respect to the religious direction they want for their children.

Another friend of mine I spoke with this week admits that God is Who and what's keeping her from going to Church. The latest UU print ad in Time magazine this month (with the tag line, "Is God keeping you from going to church?") succinctly speaks to her truth.

And as for buddy, my newfound investment advisor who attends a "non-denominational" Christian church here in town...I dunno, I get the impression he was a tad worried about my weird hybrid breed and brand of religion, on account of the dangers of relativism and humanism and the Immanent rather than Transcendent mask we UUs tend to place on God's face. I smile, raise my hands and assure him I'm in no more danger than him on my bike ride through life, even if I do appear to be pedaling a little crazily and yelling, "look ma, no dogma!" at the top of my lungs.

I like that I attend a church where I can freely raise my hand, ask a question of Peter the Pontificator at the Pulpit during service, and know that he'll have no more THE definitive answer than I do. If anything, he knows exactly how to frame the Definitive, Divinitive questions. And to this I give a reverential bow and murmur Amen, brother.

Because what I've noticed is that when God isn't busy hanging out at the busy corner of Sacred and Profane streets, panhandling for us to notice His presence, (or on Wisteria Lane for that matter), he's meditating and chillin' in the Gaps. As a fellow UU friend insists, this is the precious if precarious place upon which we all do well to stand. He calls it "the space within the dichotomies." Now if that's not cosmic, kismet and inane, I don't know what is.

And what do ya know? I've found a couple more two-word phrases to add to my UU description peace pipe and smoke ~ "don't know" and "what is." 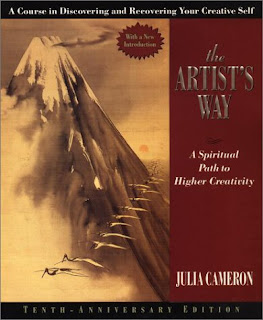 I've started a local 12-chapter "recovery" tribe centered around following the principles and exercises outlined in Julia Cameron's The Artist's Way ~ which, at their core, are really spiritual truths, of sorts. The book is 15 years old but the work is timeless, and is primarily focused around treating creativity as a sacred expression.

Keats, Gandhi et al nailed it when they declared Beauty to be Truth and Truth, Beauty. I believe all art great and small to be an expression of the Divine so this book speaks to me.

At its most basic level, the homework entails:

a) Morning Pages (writing 3 pages of stream-of-consciousness journalling first thing each morning;
b) The Artist's Date - making an artist's date with Self once a week to let my inner Artiste out to play
c) Weekly Walks - walking each week, ideally 3 times, to connect and commune with nature.

So we the people begin meeting tonight. I'm mucho excited about finally 're-claiming' my inner-artiste. I've never really allowed myself permission to delve down this road - be it writing, painting, collaging, whatevering. I allowed the spark to be snuffed out by others in grade school and then made up all sorts of excuses why I shouldn't take Art in junior high and high school.

But what I've noticed is that no matter how much I deny it, my inner Creator wants to ooze out anyways. Like when I help the kids with their creative projects for school. Or Halloween costumes. Or whatever.

So tonight marks the beginning of this reclamation process. To be continued...
Posted by Holy at 14:58 3 comments: