I was reading The Revealer this morning, as per my daily bread, and I caught paused to read this snippet, which contains this bit of cynicism and that snide commentary on the blindness of faith.

I snickered at the last link, because she expresses doubt that anyone who reads Christopher Hitchens would never read Eat, Pray, Love. Ummm, forgive me, Calahan for I have sinned - I consumed and loved both and lived to tell of it.

To be fair, I feel bad for any author such as Gilbert, who registers their blip in the Opracentric solar system, because it invariably means they start orbiting around her and becoming subject to the perils of shooting stars, falling meteors, wayward satellites and all other manner of space junk and garbage matter that gets hurled around the galaxy.

I know it's a stretch to feel sorry for someone whose seemingly unassuming memoir gets catapulted to international bestseller lists because it bears the magic O mark, but there is so much bad and ugly that comes with all that good. Namely, the anti-Oprah crowd and the kiss of intellectual death that her recommendations seem to bring.

What can I say? I loved Eat, Pray, Love. I remember closing the book and saying, Amen, sistah. I blogged as much here. Sure, she comes across as narcissistic (but what memoirist doesn't), she doesn't take herself too seriously, she writes a smarter breed of chick lit than the coffee and bonbons variety, she admits the ashram was cult-like, and moreover, she brings us a book that is apropos of 21st century mid-life female crisis and the dawning of this post-new age of Aquarius ~ where spiritual travel and messy life journeys are definitely where it's at.

I was reading another spiritual memoir (Swinging on the Garden Gate) at the same time, which was way better written, and in many ways, more deserving of accolades and praise. Eat, Pray, Love was the lighter read, to be sure, and a fun and voyeuristic glimpse into another person's religiosity - imperfections, blemishes and all. Was it the best book I ever read? No. But of course, the O stamp sets up huge expectations.

There are those who will go out of their way to avoid reading a book on the Oprah Book Club list and that's fair. But as with all matters of excess, anything labelled Oprah must be taken with a few grains of salt (adding a lemon wedge and a shot of tequila doesn't hurt either). Obviously. We need only think James Frey here to realize that.

Yet heaps of titles included in the OBC bookshelves are indeed worthy of their placement there. Night by Eli Wiesel is stunning, A Fine Balance by Rohinton Mistry is absolutely one of the best books I've ever read, and others like Anna Karenina....well, what can I say except to espouse that classic literature of that sort looks almost tainted and tacky sporting the O stamp on its cover. Of course, nepotism is alive and well with the likes of Toni Morrison, Sidney Poitier, and Bill Cosby in the group, however, such is the reality of book clubs. They are not always very democratic and holistic in their selections.

But back to the crux of the matter.

Does Oprah lean new-agey? Well duhhh. You could clearly see the spiritual evolution of Oprah, circa brand new millennium, back when she first had Gary Zukav appear on her show. His brand of metaphysics was clearly eye-opening for her, and it was apparent this was the first time she had given serious thought to the metaphysics behind the much-bantered mind, body, spirit buzz she was so fond of espousing. Since then, we've seen a parade of spiritual gurus and self-help experts grace and dance upon her couch, to the extent that her programming underwent a conscious shift to all things spiritually woo-woo and feel good. 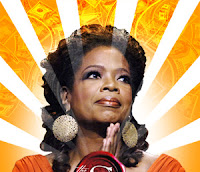 I thought it might have culminated last year when she hurled The Secret into the cataclysmic nethers of outerspace - a rightful place in many ways, if only because Rhonda Byrne's writing was lame at best, and her ideas but a sad, and in many ways, erroneous carbon copy of others. Suffice to say, the secret wasn't a secret, except to the 'unenlightened,' I suppose.

Which is where Oprah enters, lowered on the wings of her OWN angel network unto her church stage, front and centre beneath her pulpit, to preach to the unconverted. I'm kind of surprised the apocalyptic types haven't latched onto her as the new anti-Christina, but alas, a quick Google search reveals they have. A long time ago. A host of blogs and sites are dedicated to warning the masses of her Satanic ways. I won't link them here for fear I might elicit the wrath of O.com, inc. onto the sanctity of my holy place in schmidtland.

Her latest book club pick, A New Earth: Awakening to Your Life's Purpose by Eckhart Tolle, a fellow Canuck, may well be the spark that ignites the Christian soldiers methinks. Oprah will be teaching an online class with Eckhart in order to enlighten her followers of this new world order.

Having said all that, I'll read Eckhart's new book, if only because I think he disseminates complex Buddhist thought in an engaging and accessible way. And because curiosity killed the cat and I once owned cats.

But if, as Maureen Callahan-channelling-Hitchens asserts, this reeks of "Western fetishization of Eastern thought and culture," then so be it.

'Kool-Aid' kumbaya may seem kooky and krazy to my acquainted brethren, the Über-secular humanists of the world (with whom I sometimes flirt, God have mercy on my soul), but gene counting isn't exactly a multi-sensory festivity we're apt to confess we wish we had done more of upon our deathbed.

I say bring on the big plate of linguine, sprinkle it with a liberal dose of Sanskrit chanting, wash it down with a bottle of two of Chianti and chase it with a shot of carpe diem and a late night snifter of amore. It'll probably cause a cosmic burp or two but what the heck? When we sit down in the penultimate moments of our life to watch that epic cinematic adventure movie called This is Your Life, we might as well make sure there's some PG-13 and R-rated, popcorn worthy moments.

And don't forget the extra butter and salt, and wait a minute: did someone say salt? You might as well bring on the tequila, too, then. And since this is the final shot, make sure it's the good stuff when you slap life's ass and declare in your best Chaucerian accent that, "upon the rump, God save you, I am done!"

Because let's face it: pasta, puja and punta dancing, not unlike their distant cousin, beer, are indeed theological proof that "God loves us and wants us to be happy," or thus spoke Benjamin Franklin.

Amen, brother Ben. Pass the communion wine. I'll drink to that.
Posted by Holy at 11:14

Let's just stop the madness...It is possible that Oprah is misleading the masses, much like so many Ministers and Preachers, but do you know for sure that she is; and even if she was, is it anyone's rightful place to judge? I think not... HAVE MERCY ON OPRAH, for cryin' out loud; or should I say "FOR CHRIST'S SAKE."
~TAi

TAi: I have nothing against Oprah, per se. I occasionally watch the show, when time and desire permits, and subscribe to O, and pay attention to the O Books because most are indeed, great books.

My point is that so many so-called spiritual seekers have not sought this info out on their own accord - secondary source books like The Secret should never have seen such hype - she needs to be very cautious what she gives her stamp of approval to.

In fact in many ways, The Secret with its attract wealth messages, is almost the antithesis to Eckhart's New Earth effortless doing message.

But I have absolutely no problem with her brand of spirituality - she's been on this mind, body, spirit path awhile and it suits her.