I donated blood a week and half ago for the first time ever.

To be honest, I was a tad nervous about doing so, giving my pusillanimity towards needle poking and such. Nothing like a couple of amnios and epidurals to breed an irrational aversion to needles. But phobic apologetics aside, I lived to die another day, although my arm still sports a rash and is sore even today.
Holy Daughter wasn't so sure about this. I'm not certain what she thought said donation meant to my health in the scheme of things - I suspect she assumed my donation was a life & death, quid pro quo economic equation - my pint to help save another life must somehow mean I was risking mine.

She made a point of telling everyone within earshot that day that her Mom had given blood, and she went to great lengths to ensure I was drinking my fair share of water. She also harboured a morbid fascination with wanting all the gory details - did it hurt? did I watch the blood drain out? how much did they take? what colour was the blood? When I told her it was more burgundy- rown than fire engine red, she was completely grossed out. 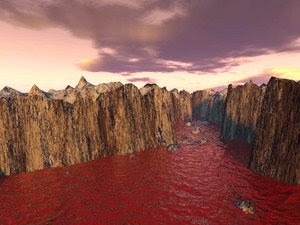 In religious terms, blood is like that. Sacred, sacrificial, economic, taboo, impure and infinitely profane. It is the holiest yet potentially, most polluted river of life.
Tertullian said it best in this regard when he declared that "the blood of the martyrs is the seed of the church." In fact, if you look closely at the foundation of every religion, you'll find blood (or the absence of, as in the mythos of virginal birth) to be the very ink stain of the prophets.

Shi'ites flagellate themselves each Feast of Ashoura in bloody commemoration of their holy martyr and great Prophet's grandson, Hussein. Arguably, Jesus the Christ wins poster boy fame for blood sacrifice in religion, in that he is offered up (posthumously) in synocdoche for the sins of humanity. The blood ritual continues today, as Christians partake in communion by drinking the Eucharistic red wine and thus, not figuratively but literally, consuming the transubstantiated blood of Christ.
Sacrificially, bulls, goats and lambs figure prominently in the formation, and indeed, syncretism between ancient Egyptian and Vedic rites and the mystery cults of the Greco-Roman Empire, such as Mithraism, as well as the later pagan, Ancient Israelite, Jewish, Christian, Islamic, and Hindu religions.

The sacrality and profanity of these rites explain, in part, the prohibitions of Acts 15:29, which suggest staying away from food sacrificed to idols, as well as abstaining "from blood." In fact this passage becomes the justification by faith and revelation that JCs will use and cite when they allow their offspring to die rather than undergo a life-saving blood transfusion.

Consider also, Judaism. Jewish dietary laws prohibit the consumption of blood because the life and soul of an animal is believed to be contained in its blood, and also because blood is believed to be the body's polluted rivers, of sorts, which becomes the dumping place for any bacteria, viruses or impurities upon the animal's final moments.

Leviticus 17:14 states ~ "For as for the life of all flesh, its blood is identified with its life. Therefore I said to the sons of Israel, 'You are not to eat the blood of any flesh, for the life of all flesh is its blood; whoever eats it shall be cut off.' The link between myth and ritual here is murky, most especially because this core belief in blood as the life sustainer and more importantly, soul keeper, dates back to those prolific philosophers - Pythagoras and Plato - and their views on the transmigration of souls.

This life sustaining, soul-keeping notion is prevalent in myriad religious worldviews to the extent that blood is both revered and reviled. The Indian goddess, Kali, is renowned for her insatiable appetite for blood, and inspires an almost fanatical blood and fertility cult that continues today, albeit minus the live sacrifices. She is the divine bitch, mother, child, lover and redemptrix.

Blood's fertile and sacral properties are richly entwined in history and etymology, such that links can be found between the ancient Sanskit word for ritual, rtú and the advent of winter as the approaching or 'cooling-off' season of menses. Owing to its fertility links, blood from the womb was thought to have great animating prana or creative, life-force energy, and indeed, it does, for arguably, blood also indirectly spawned the birth of ethnomathematics. Female blood is a prime example of the mysterium tremendum et fascinans phenomena which Otto, Eliade et al allude to, wherein the idea of the holy is a force that is both fearsome and fascinating.
Indeed, in some tribal societies, such as the Kalash Valley peoples of what is now Pakistan, menstruating women are deemed untouchable and are still sequestered away in menstrual huts in moon-phasal fearing fashion. Said impurity and male fear of womanly power lies at the root of most patriarchal, Vedic and axial-age religions - blessings be to Zoroastrianism, the ancient Aryan rulers and countless tribal kings the world over who were responsible for shifting the cult of blood from the macro to the micro.

The fertility cult of blood alive and well in matriarchal/goddess religiosity (theme song: I am Woman, Hear me Roar), with its mythic and universally animistic imaginings, no longer suffices. In its place comes a decidedly more controlled, contested and personal religiosity of blood, wherein blood is no longer sacred so much as profane in theopolitical terms. Blood becomes a theopolitical bath and body works commodity for he-men (theme song: I'm the King of the Castle) in search of divine kingship and immortality.

Such is the lot of woman - the whole mysteriously, bleeding lot of us - misogyny continues to be alive and well, even, or might I suggest, especially today. Of course, modern science paints a different, revisionist canvas, and indeed, so do many resourceful femme artistes, who use menstrual blood as their chosen painting medium, but time will tell how well such things as menstrual stem cells and the bleeding arts are received.

Socio-cultural and gender issues aside, blood continues to be highly symbolic and in many ways, metonymically understood in many cultures.

In Aryan times, the bindi or red tikka mark on the forehead was a ritualized seal of marriage, signifying the newfound chattel status of bride unto husband. A red powder is the modern substitute, as is its more auspicious purposes of luck (warding off evil) and wisdom (tantric/sixth chakra link).

Blood is inherently perceived to have this power, which is why it is oft associated with many tribal coming-of-age ceremonies. The memetics of blood ceremonies find their way from occult practices and necromancy to modern Western schoolyards, with pinky swearing and cross my heart performative utterances. I defy most adults of a certain age to deny having performed a secret blood brother or sister ceremony with a best friend circa 60s and 70s or neighboring decades pre/post to that.

The magic and mystique of blood as the great alchemical potion and holy grail elixir, is a cup that runneth over into literature and language, thanks to Dracula lit and lore. Leeches (blood suckers) have come to symbolize a lowly-life form, with vampires at the helm of the food chain; just as crimson/red and passion/heat and murder/redemption have their place as symbolic stand-ins for poetry, prose and post-modern lyricism, where loves often lies bleeding on Sunday bloody Sunday.

Blood is to artery as branch is to tree. It connotes family ties and loyalty because it's "thicker than water," it is the remains of the day in times of sport, war, battle and gruesome death; it suggests toil and sacrifice along with its other bodily fluid friends - sweat and tears, it hints at fear when mixed with chill, it is linked to money, thirst and lust; and it has entailed much medical letting in past centuries, as doctors sought to temper human dis-eases and ailments. Interestingly, in Ayurvedic terms, bloodletting is called rakta moksha (rakta means blood and moksha means spiritual liberation in Sanskrit).

And, in that it is the last of the four humours, blood comes to be associated with the season of spring, sensing perceiver temperament (artisan), the liver as organ, warm and moist as qualities and courage, hope and amour as ancient characteristics.

As a religious archetype, however, blood is incestuously entwined in history. One hears talk of blood in relation to one religion or another, particularly in recent history, wherein the battle for God is as contentious as ever in history. I have fundamentalist friends and relatives who like to grant Islam with the dubious honour Islam of being the religion of blood (and I do not mean blood in prophetic lineage terms), yet obviously, all religions may lay claim to said fame.

From time immemorial, Mircae Eliade insists religious (wo)man has been participating in the "primordial divine act" of blood sacrifice in imitatio dei, by reenacting the cosmogonic and mythic birth of humanity ~ one that more often than not cross-culturally, entailed creation by sacrifice or dismemberment within a culture.

Arguably, blood continues to be a mainstay typology, mythically and ritualistically speaking; and if this ongoing clash of religious civilizations we bear witness to is any indication, I would venture to guess it will remain so for some time to kingdom come, thy will be done.

On earth as it is in heaven, or so our hierophanic imaginings would have it.

"My great religion is a belief in the blood, the flesh, as being wiser than the intellect. We can go wrong in our minds. But what our blood feels and believes and says, is always true. The intellect is only a bit and a bridle."
D.H. Lawrence
Posted by Holy at 11:58

That was the most absorbing post I've read in a long time. I grew up hearing about "blood kin" and the utter importance in it: nothing means more to Southerns than their blood kin and Jesus, lemme tell ya. I was always squicked by the idea of drinking Jesus' blood, not so much at the idea of taking in His body because the wafers *obviously* weren't His body, but hey...the wine looked like it could be...

Thank you for this piece.