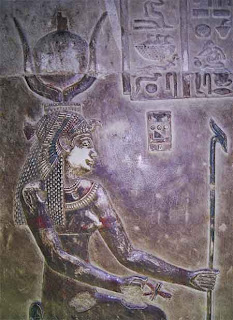 I took this goddess quiz and it turns out I'm Isis.
She's as good a mother goddess as any mere mortal mama could aspire to be - less destructive and fearsome than Kali, and a good deal more anorexic than those Germanic matronesses or Maltese mamas that Gimbutas helped resurrect to the forefront of our collective divine consciousness.
But I have to confess - being queen of the underworld sounds dreary and tedious. Having to perform, recite and cast all those Book of the Dead mummification rituals, incantations and spells.....it all sounds exhausting and cold as Isis. The only bright spot would be doing the goddess strut in the underbelly of the pyramids. Well, OK, it also wouldn't be too shabby to have my own cult and be the goddess of 10,000 names. I'm thinking it would be much more easier to be a Mayan Moon Goddess who hangs out in hot cenotes and drinks tequila tempered with a shot of agave juice and adorned with a slice of pineapple and a maraschino cherry. What the heck...if you're gonna chill out down under, you might as well do it up in slothful style.
Posted by Holy at 11:15

Hmmm... I am most like Hecate, daughter of the Titans. She's the Greek goddess of the crossroads, often depicted as having three heads; one of a dog, one of a snake and one of a horse. She is usually seen with two ghost hounds that were said to serve her.

Whom she will she greatly aids and advances: she sits by worshipful kings in judgement, and in the assembly whom her will is distinguished among the people.

In later times she was vilified by the church as the goddess and symbol of witchcraft and magic.

I hope they don't come to my door with torches and pitchforks now!

Wouldn't it be convenient to take a multiple choice quiz, or know what sign of the zodiac we were born under, or which animal we were according to Chinese astrology? Wouldn't that help us understand who we are, where we're headed?

At best, these are statistical approximations of the "average." At worst, just another case of pissing into the wind.

Sure, some people fall squarely under the mid-point of the bell curve, and do represent the "average" quite well.

How do I know?

1. You have your own unique history, style, DNA, and fingerprint patterns.

2. I have little patience with average people, yet visit here often. That makes you unique in one way or another, and suggests that you fall somewhere on the extreme edges of the curve where most fear to live.

If the quiz is valid, I'm Artemis. I'm not Artemis. That makes the test bogus and means that you are not Isis.

I think you're more complicated than Isis, face many more challenges daily than she ever did, and have a much more interesting blog. I've read hers... it hasn't changed for thousands of years...

You, at least, got to be a goddess. I usually get assigned the role of a horse thief, or some such. :-) Be well,
J.