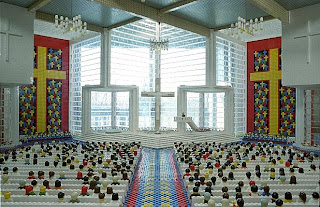 Holy Son fairly skipped his way into church this past Sunday. I almost took a picture and posted it here, because the site of it was such a cosmic anomoly.
Alas, I know I should heed the second mark of Buddhist existence at this point because I'm fairly certain that this, too, shall pass.
The secret behind his Sunday skip? Lego. Of course. He was lending his bin of bricks to the holy cause of constructing sacred space and architecture in a special RE workshop for our Grades 2-5 kids, which in the case of this past Sunday's creations, ranged from structures such as the Taj Mahal and the Acropolis, to Wiccan churches, to secret chambers - think early Christian church history here - to nature spots, and other more modern, churchy-looking buildings.
Now I have done a ton of things in a myriad of churches in my time - snored, coughed, laughed, cried, drank coffee, read a novel, gagged on the Eucharist, lipsynced, even prayed a time or two. But I have to now admit, building a Lego chalice out of primary color bricks and adorning it with three miniature red flames ranked right up there in my top five most divinely delicious moments of what not to do in church.
I would rate it slightly higher than reading the newspaper in the front pew and just below that one incident at the Sherwood Park Christian Reformed Church on the coldest winter day in Alberta's history, when I accidently tried to lick an icicle hanging from the boot rack outside the chapel doors and became stuck for 45 minutes until somone thought to pour some warm water over my frozen, exposed tongue.
There were roughly a dozen boys and even a couple of curious girls who attended the late service Lego workshop on Sunday, which I think was most impressive. Holy Son isn't the only boy who drags his feet at the thought of attending Sunday RE, and little wonder. Religious education tends to be geared to girlie interests, generally speaking. Classes are traditionally oriented so as to encourage captive audience storytelling, theological discussions, cooperative games and arts & crafts. It's all very sugar and spicey, which is to say that it is the structural antithesis of what boys want to do. They need kinesthetic time. They like to engineer things and they need to really get behind something. Which I suppose is why our RE Director embraced my little Lego idea when I pitched it to her last spring.
Parents are not alone in lamenting the lack of engaging curriculum components for boys. All of us First Grade RE teachers last year noted how much of the time, the boys were no-shows. Who can blame them? It's painful for boys to have to conform to an unworkable learning environ every Monday to Friday in school, and then have to endure much of the same again on Sunday morning.
Less jaded RE educators might beg to differ, but Sunday school is little more than glorified babysitting. Sandwiching in any schmigeon of religion between the two slices of wanting to be fed a snack and wanting to play at the playground bread is a super-human feat, even on the best of days.
So what the heck - imparting a little Lego and let God in their Sunday schoolin' - or whatever it is you wish to call the divine wisdom of Lego creation and imagination - might just be what's needed to start our own brand of Sunday revival.
It's one one of the many new things we're trying in our little corner of the UUniverse. This past spring, a few of us in the children and youth ministry sat and down and schemed ways to revamp the entire younger ages curriculum from top to bottom.
We fashioned it, to a small degree, after the ever-popular workshop rotation model that is alive and well in many mainstream Christian churches. We then identified the key teachings and themes our children, parents and teachers wanted to see included - be these of history and mystery, social justice, or prophetic teachers - and then set about determining where and when to plot the noted priorities into the RE calendar. Last but not least, we looked at how we could then overlay the core UU principles and sources, as well as important rituals and service projects, whilst still honoring the sacred wheel of life that lives liveliest in seasonal holidays and holy days, not to mention other annual festivities and events.
Thus, a new child was born with a completely revamped curriculum this year. So far, so good but the year, she is young. On a macro sacle, I get that Sundays such as this past one are mere drops in the Lego bucket of an entire childhood of church memories. But getting up and going every Sunday for this newbie family of churchgoers remains a struggle, so the more enticements there are for the kids, the merrier.
Will this past Sunday's workshop register as a transcendent moment on the childrens' REchter scale of religious experiences and learnings? Probably not. But if you ask me, it sure beats the holy heck out of having your tongue stuck to an icey boot rack while a bunch of Dutch Reformed gray-haired grannies hover around you, fretting and frowning.
Posted by Holy at 13:16

Labels: Lego, sacred wheel, UU, what not to do in church, workshop rotation model