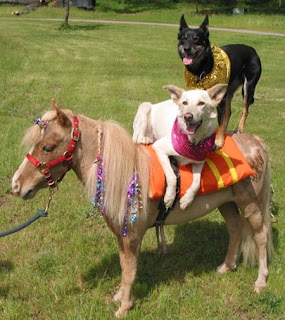 Did you hear the one about the Catholic priest, the evangelical apologist, the philosophical portmanteauist and the heretic?
God instructed each one of them to race to the finish line, and whoever got there first would be allowed to be crowned the winner, thus permitting him or her the opportunity to visit the Throne room and sit for a time to experience the glory and exaltation that comes with being the Chosen One.
So God lined each of them up - and to be fair in American religious terms, added a host of other Catholics, evangelicals and the like into the mix. He then dressed them up in religio-carnival garb. You know ~ the usual suspects. The lion, the white witch, the lamb, the philosopher king of raccoons, the goddess, the serpent, the virgin, the temptress, et al - and instructed each one of them to gather thee followers and thine flocks to stand in front of them, affix their sites on their chosen target, and squirt holy water pistols at said target in bell ring, all salivate fashion. Whichever of the carnival racers should rise to the top, would be declared the cream atop the pitcher of sour milk.
Each of the racers quickly assumed their position. On the stage, the lion preened, the goddess mooned and the poet schemed....not a word was spoken, the church bells all were broken.
I could go on here, but you know how the real lyrics go anyways. Suffice to say, the joke's not technically over.....you have to wait until November 8th, when the voting closes for Best Religious Blog in the 2007 Weblog Awards for the punch line.
I don't mean to make fun of the Weblog Awards....well OK, actually I do, but only insofar as I'm always amused at how art imitates life imitates art. While I'm flattered to be in the blogofray mix and in the cybergroover, I remain, nevertheless, endlessly amazed at the not so fine giant, scented, washable marker lines between reality and surreality.
At last count, my humble blog has amassed some 7% of the total votes in the Best Religious Blog category. Which is impressive and amusing, if only because:

(a) I don't have nearly as many readers as voters
(b) I don't even know as many people as there are
votes for my blog, and;
(c) I don't pigeonhole very nicely into a quantifiable round
hole, being a square peg and all.

Said squarepeggedness clearly accounts for some of the drive-by protest votes I'm sure have been aimed my way by the few or many, such as the science bloggers who lament the absence of a Best Atheism Blog category and thus, may mistake my brand of heretical musing for a lack of theism. Or those who have read my fine print and might well have erroneously assumed my UU cloak precludes any form of trinitarian belief on my behalf.

Ponderings schmonderings though. That I'm even a sub-layer of pond scum in this pool of blogs, is for some, the great scandal of my shortlisting.
I've had a chance to now visit all of my 'opponents' blogs and forgive me Father for I have sinned...I peeked into your cupboard drawers (I drank an extra strong Bloody Mary for breakfast as penance though), and snuck a read at some of the fear and trembling notes from your faithful sheep, who seemed to be b-ah-ah-ah-ah-lking at the company you've had to keep in this God and pony show.

What can I say? How much nobler and 'vastly superior' you appear in their eyes - standing as you do amongst all manners of pariahs and sinners such as the LBGTs and indeed, even the so-called intellectual featherweights. That is most admirable. No doubt, God will reward you for your fortitude in not 'blending in' with this motley crew, Fr. Z. :)
Actually, kidding aside, Fr. Z is being rewarded.
His pistol shooters have a pretty steady aim, if his impressive garnering of 42% of the vote is any indication. Mind you, from the looks of this Catholic Forum, of which he coincidentally appears to be forum adminstrator, it helps to have 11,000 potential sharpshooters gunning for you... even if a few of them are, uhmmmm, shall we say, a tad homophobic and unecumenical.

Good thing commenter Kent (do take a moment to scroll to the bottom of the comments in the CF link above for his worldview on LBGTs and other inferior souls - I supplied a few of his words in 'scare' quotes above) wasn't a member of Fr. Brennan's parish. I sometimes marvel at the etymological divide between small c catholic and Big C Catholicism. Only sometimes though because every Catholic I know, close friends and family included, is bi-atholic. That is to say, they swing both ways.
But I digress.
My point - and I do have one - is that this small sampling of shortlisted blogs, in whose company I happen to keep for a brief time, is clearly not representative of the best of religious blogging. It is but a moment in time reflection of bloggers who names were submitted...nothing more, nothing less.
So those who assume outrage at the categorical inclusions, because they have Christian ringtone links; or worse, at the sins of omissions, need recall the second deadly sin of religious comparison: the lack of an adequate cross-sampling. Where is the Muslim, the Buddhist, the Sikh, the Hindu, the New Ager, the Wiccan, quick name another religion, etc, etc., in the mix? Enter, One Cosmos, stage left, with his best Arnold Horshack impersonation.
If anything, we serve to highlight the dangers of reductionism and the fundamental problem of defining voice. The question remains: who can and should speak for faith and reason ~ the Catholic, the evangelical, the racoon philosopher, the candlestick maker? All of us? None of us? For those of you rushing to pick the "right" answer, here's a hint: it's not a skill-testing question, it's rhetorical.
But if you feel so compelled as to play in God's arcade room, then by all means, come wave a flag in my little corner of the race. There's no line-up. And if you aim your water pistol and all those drops of water in the endless sea straight enough, you'll even get the added cheap thrill of seeing my burquah skirt fly up to flash a glimpse of fishnet, as it kicks up a bit of dust in the wind.
Because Kansas was right: all we are is dust in the wind, which is as apt a blogging metaphor if ever there was one.
Speaking of wind dust and cries in the dark and the blog post penultimate to this, when I alluded to the notion of epitaphs ~ I shall leave you with one of my fave-ola poems. I believe the author is Bishop Pedro Casaldáliga, a renowned liberation theologian.
Note to younger Brother: if I should die before you do, I pray thee heed my last gumshoe. I ask that this poem be read at my wake. Further note: it is to be read just prior to the mandatory plenary performance of the Belle of Belfast jig, which my lovely daughter, the budding Irish dancer, shall perform.
(My apologies to His Excellency in advance for my creative pronoun bastardization).

I shall die erect, like the trees.
(They will kill my standing upright).
The sun as the sole witness, shall put its seal
On my doubly anointed body,
And the rivers and the sea
Will become the paths of all my wishes
While the primordial forest joyfully shakes its treetops over me.
I shall say about my words:
I did not lie when I cried out.
And God shall say to my friends:
“I attest that (s)he lived among you waiting for this day.”
In the twinkling of an eye in death
My life will become truth.
Finally, I shall have loved!
Posted by Holy at 13:20

Love the thoughts and debunkiness.

Love your thoughts and theories.

(I just didn't want to wait until that poem gets read aloud to let you know... if you didn't already.)

With the way I live my life, there's no way in H-E-(double hockey stick) that you'll die before me. That said, when you join me on Cloud #42, we'll read the poem together.

I voted for you. Cause I think you are brilliant and funny. Slightly whacked, of course...but, then...that's why I like you so much. Sometimes what you have to say makes me stare off into space with a half-smile as I sink deeply into contemplation, other times what I read here makes me squirm and think 'God...if some people knew where she lived, Holy would be in a whole mess of trouble', other times reading what you write makes me snort my coffee (causing either a less than holy mess on my computer desk or a bout of choke-coughs...depending on whether said snort occurs on an inhalation or exhalation.

Either way, in my opinion, there are none that compare to you, and I for one am tickled that you wear fishnets under your burquah skirt.

And I love that you used the phrase bi-atholic. *snort* (upon inhalation)

Anonymous said...
This comment has been removed by a blog administrator.
5 December 2009 at 17:12