Midnight in the Garden of Good & Evil 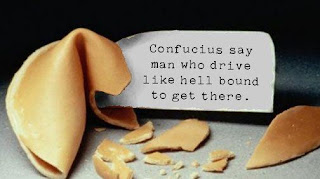 The other night, I fell asleep watching The Antichrist on the History Channel.
I caught only a few minutes of it but I may tape it tonight at 1am. If only because it seems everywhere we turn, we are being subtly and not so subtly reminded of the events and mediums of the day which suggest the end is near. Al Gore et al have been awarded a Nobel Prize for bringing his Inconvenient Truth to the forefront of the world's consciousness. CNN is featuring a Planet in Peril series. Fundamentalist churches seem to be conveying more urgent signage.What's a gal to do except to camp out in the last minute indulgences line-up now and show them my Get Out of Hell Free card and hope for the best? 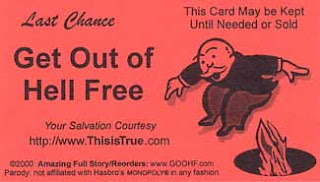 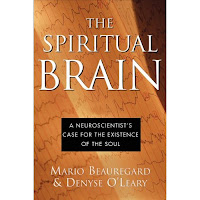 Oftentimes, when borrowing popular demand books from the library, I feel a kind of misguided loyalty to read each and every word. Such is the case with The Spiritual Brain: A Neuroscientist's Case for the Existence of the Soul. Sometimes common sense prevails, however, such that abandonment remains the only avenue. If something bugs you, set it free. Or something like that.

There I was, about two dozen pages away from the finish line but I couldn't hang on any longer. There remained no hope that this book might offer any kind of chemical marriage between the outer limits of science and the inner limits of religion. And post humus to my reading, I still don't get his so-called case, except to intuit that his apologetics, in defense of of a more holistic study of religious experience and against what he calls "dogmatic materialist scientism," are extremely weak. His religious studies scholarship? Weaker still. But shucks, if you don't believe me, ask the science blogger types. Dogmatic materialist scientismy types, the whole lot of them, it's true ~but they're also a heck of a lot more rational than Beauregard's argument in this book.
Or if you'd rather read a more favorable book review for good measure, then you'd be heeding Sir Francis Bacon's advice: "Read not to contradict and confute; nor to believe and take for granted; nor to find talk and discourse; but to weigh and consider."

To be fair, two things stand out within the 3oo pages. Firstly, he insists there is no centralized 'God Spot,' as previously hypothesized by Newberg and D'Aquili (authors of Why God Won't Go Away). On the contrary, God on the brain is, instead a "complex and multidimensional" phenomena.

Upon studying the mystical experiences of Carmelite nuns, Beauregard insists that religious experience (he calls them RSMEs) is "neurally instatiated by different brain regions involved in a variety of fucntion, such as self-consciousness, emotion, body represetation, visual and motor imagery, and spiritual perception." So there's a bit of a laser, light show going on in the brain. Well, quelle suprise, Monsieur scienteeste.

The second notable standout occurs on the penultimate pages of the book, where Beauregard finally gets to his real point epiphany by confessing to having had a "cosmic consciousness" type of religious experience twenty years ago. It was his awe-ha moment. Materialists will have a heyday picking apart the biological roots of his illness narrative, as this experience purportedly happened while he was suffering from chronic fatigue syndrome. Cynicism aside, he still does little to further this all-important field of study, owing in large part to his shoddy scholarship.

To be honest, the last time I saw such piecemealed scholarship was on a draft version of one of my first year religion courses as an undergraduate, in which I was attempting to imbed five million expert quotations into my research paper as a way to give makeshift props to my non-existent thesis. Beauregard and O'Leary have apparently lifted a page from this freshman approach in hopes that neophyte readers will be summarily dazzled by strings of four or five quotes from the likes of long dead mysticism heavyweights like William James, Evelyn Underhill and W.T. Stace, and thus, might forget Beauregard had yet to make his point. Although he insists to the dismal finish that he has one.

As summation for his case, Beauregard calls for a more integrated framework of study between science and religion in order to apprehend an "intuitive, unitive, and experiential form of knowing." I sympathize with his viewpoint and had high hopes his book might be a more comprehensive study as such, which is why I have been eagerly awaiting this reading.

But in the spirit of true religious confessions, I have to admit that I have been highly disappointed with arguments on both sides of the table as of late. I started to read The God Delusion by Richard Dawkins last year but finally gave up, not because our views were diabolically opposed (they were and are) and not for lack of highly amusing discourse (Dawkins dolls this out in droves) but because once again, lax scholarship (shame on Oxford for permitting this) and prooftexting leaves much to be desired.

So then I thought I would jump sides to see what Francis Collins had to say with The Language of God: A Scientist Presents Evidence for Belief. This one I managed to finish but again, I admit to a vague feeling of disappointment. Then, as now, I cannot help but feel as though all these scientists hold the veritable key to the universe, and yet they are too busy jossling each other at the gate about whose key is a brighter shade of gold to bother unlocking the dang thing.

I'm just not seeing compelling scientific evidence either for or against God from either camp. I firmly believe in intelligent design, just as I strongly believe in evolution, albeit from a teleological perspective; affording me, I suppose, a rather tenuous foothold upon process theology ground.

I have a sneaky suspicion that the answer, my friends, is blowing in the wind from Santa Barbara, and I don't mean from Oprah. Consciousness studies, that last horizon, that final frontier in this race for god, guts and glory, is likely where it's at.

Beauregard and his co-author, Denyse O'Leary say as much, of course. Too bad they preface it with 295 painful pages before doing so. If you must read his book, do yourself a favour and begin at the end and work back. It's not exactly an evolutionary approach, but I suspect Beauregard himself might commend you for this.
Posted by Holy at 10:45 4 comments: