The deeper that sorrow carves into your being the more joy you can contain.
Is not the cup that holds your wine the very cup that was burned in the potter's oven?
Kahlil Gibran

Our church toasted a key aspect of service last week. And by toasted, I do not mean that they raised a glass in honour of a long-cherished tradition. No. They no longer feature the sharing of Joys and Sorrows as part of the natural order of the sermon. And while I'm sure freeing up an extra 15 minutes of service time brings the good pastors great joy at the thought of yet more time to pontificate to the congregration ~ I personally feel sorrowful that such a personal and emotional component of our congregational life is no longer.

If you're still stuck on wondering what the sharing of Joys and Sorrows entails, permit me to digress. It is perhaps one of the more defining and unifying functions of UU pastoral ministry. It involves having congregates step up to the mic in order to ritualistically pass a flower from one vase to another, whilst verbally sharing with the church fellowship the best or worst part of their week as they do so. This may be a small and trivial joy, like getting a new job or finishing a major incomplete project, or it could be a huge life sorrow, such as the death of a family member.

Yet regardless of the size and scope of these joys and sorrows, there was something so emotionally touching about all of them. It allowed new members like me to put a name to a face and breathe meaningful life into each person, thereby reminding me anew what it means to be an iota in this interconnected web of creation. What I'm talking about is the remembrance that life is about connection, grace, gratitude and at least two of the three marks of Buddhist existence - dukkha (suffering) and anicca (impermanence).

I suspect churches the world over struggle over how best to make their ministry minutes count. Our service is typically 75 minutes, give or take a dozen, depending on the sermon de jeur. There is rhyme and reason and cadence and measure to it, such that each quote, each reading, each tale, each hymn, relates metonymically and musically to the sacred wheel of life.

But the service feels emptier now, devoid as it is of the happy and sad tears and faces that accompany joyous and sorrowful proclamations. And devoid of a certain kind of intimacy, connectivity and shared ministry amongst the community. The ministers insist that they will still share the highs and lowlights - but they will do so vicariously. Because, it would seem, they have the power vested in them to do so. Amen.

I'm not a seasoned UUer - I can still count my total churchgoing visits with only a few rounds of fingers and toes, so I'm not yet jaded to the fact that Mr. Klein was inclined to go on ad nauseam about his aches and pains at the podium during this time, to the utter bemusement of those who know and love him, to the extreme annoyance of those who do but wish they didn't, as well as to the abject boredom of the younger folk who squirm restlessly in their seats and pray only to God at these moments when they wish to escape this certain form of hell.

And I don't know Mrs. Weingartner with her whiny ways and her nasally voice, so to my newbie ears, she sounded less tentative and insecure than I guessed she otherwise might ~ as though for this one moment at the podium, she gets that her problems are significant and that she does indeed matter in some small and real way in the big scheme of things.

But I know something of what it means to be human, or so the decades tell me, and it seems to me that the passing of this part of service feels rather like a human departure. A liturgical death of a loved one whose time had come too quickly, and whose obvious absence has yet to be mourned fully, and whose burial ground cannot be fully discerned as being either a shallow grave or a deep rut.

Ashes to ashes, dust to dust. And for everything there is a season, turn, turn. And so I move this blog flower in small sweet sorrow for the parting of a great church tradition. 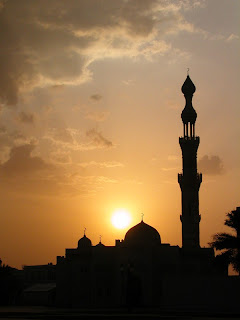 "Prayer brings us half way to God, fasting brings us to the door of his palace, and alms-giving procures us admission."
The Holy Qur'an

According to the lunar calendar, today marks the start of the highest and holiest of all Islamic holidays - Ramadan.
Westerners tend not to give much thought or observance to Ramadan which is a shame, as there is much to be learned about the ritual, piety and "dark night of the soul" ascetic sacrifice necessary for a Muslim to honour this 4th pillar (siyam) of his or her faith. The list reads like a high school behaviors list. In a conch shell, it prohibits food, drink, sex, alcohol, tobacco, or reluctant yielding to any of the deadly sin temptations, save perhaps sloth, which inevitably ensues following abstinence from all things fun, feast and frolic.
Because while sloth is not necessarily encouraged, it is nevertheless condoned, if only because maintaining high energy levels when the body all quasi-shuts down each day between sunrise and sunset, is all but impossible.

Yet Ramadan is also about zuhd - detachment. It is essentially asceticism for the common folk who live very much in and of this world for the other eleven months of the year. It is a time when all tenets of the faith - devotional creed recitation, prayer, alms giving, and yes, even pilgrimage to Mecca (if only in metaphorical and salvific terms) become as but One hyperlinked religiosity, as devotees submit to the will of Al Muqeet, Allah the Nourisher, to provide them with sole and soul sustinance during this time of self-denial.

Such fixation on Allah is precisely the point of fasting, in fact. By working through the various levels of ritual purity, such as avoidance of outward practices and sins of the body - be these gluttonous or lustful in nature - a devout Muslim is then stripped down to the quintessential, innermost practice of the heart and spirit - that which Paul Tillich dubbed one's "ultimate concern."

This third level of ritual purity is what Al Ghazali, the famous Islamic philosopher, considers the most virtuous and ultimate submission of the fast - refraining from thinking of anything but Allah during this month. Indeed, the first tenet of the faith (shahadah), which states, "there is no god but Allah" rings literal here - and such fixation expressly discludes the lesser culinary, sexual and hedonistic gods us mere mortals tend to worship most of the time. Thus, not only is it a time of refraining, it is also a time of reframing one's religiosity towards and upon the One.

Little surprise then that fasting in a mainstay in most religions. Think Yom Kippur, Purim, Lent. It is a kind of desert spirituality 101. Indeed, mystics have apprehended the noetics of fasting since time immemorial.
I'm no psychobiologist ~ a psychobabblist might be a more apt moniker ~ yet even my most cursory glances at the scholarship of medieval historians, such as Carolyn Walker Bynum's works, suggests to me that social control issues aside, there is a clear correlate between starvation and lack of nutrients and oxygen in the blood and altered state of consciousness. That age-old, pass-out game we used to play for kicks in junior high back in the day (which was the prototype for the choking/strangling game of recent hype and hysteria) worked a similar kind of magic and agape as the Eucharist diet (wafer-only) did for certain anorexic medieval mystical women who shall remain nameless. Restrict oxygen flow and voila, God is good, God is great, let us thank him for this high, Amen.

Controlled fasting, however, can be entirely a good thing as far as one's religious outlook is concerned. One learns quickly to adopt an attitude of gratitude towards Allah, who both giveth and taketh away. For an excellent glimpse into one adherent's experience of both fasting and Ramadan, click here.
Alas though, the link between suffering and soul-making is an unwelcome reality for many. As Carl Jung once asserted, "One does not become enlightened by imagining figures of light, but by making the darkness conscious.” Somehow though, thirty long days and nights of fasting seems like a wilderness trip fraught with peril and pain. I think I far prefer the vicariousness of armchair religious fasting. Less suffering, and austerity of being, and all that.

And as if on cue, my stomach rumbles, beckoning for me to give it its dates and daily bread. So I shall throw crumbs at this lesser demi-god, while summarily admiring all Muslims who go without today and this month thereafter.

Peace be upon them ~ the full chand, she is near. For just as good and evil were Eden's primordial playmates, fast and feast are only one vowel removed. All who succeed can weigh in at month's end on matters of both divine devotion and yes Virginia, even fat loss.
Eid-ul-Fitr is the first official feast at which to eat and be merry again, guilt-free. Eid-ul-Adha, which follows some moons later, is my personal fave, however. Goat slaughtering abounds in ritualistic ode to the theme of this feast: sacrifice. Indeed, violence, the sacred and goats, or rather, scapegoats, go hand in hand, or so sayeth Girard. With only a couple of word changes, the mantra for this holiday changes from ashes to ashes, dust to dust to "goat meat to fire, fork to mouth." Same blood, guts and glory, different religion, is all.

Fasting
There's hidden sweetness in the stomach's emptiness.
We are lutes, no more, no less.
If the soundboxes stuffed full of anything, no music.
If the brain and belly are burning clean with fasting, every moment a new song comes out of the fire.
The fog clears, and new energy makes you run up the steps in front of you.
Be emptier and cry like reed instruments cry.
Emptier, write secrets with the reed pen.
When you're full of food and drink, Satan sits where your spirit should, an ugly metal statue in place of the Kaaba.
When you fast, good habits gather like friends who want to help.
Fasting is Solomon's ring.
Don't give into some illusion and lose your power,
but even if you have, if you've lost all will and control,
they come back when you fast, like soldiers appearing out of the ground,
pennants flying above them.
A table descends to your tents, Jesus' table.
Expect to see it, when you fast, this tablespread with other food,
better than the broth of cabbages.
Rumi
Posted by Holy at 12:09 4 comments: